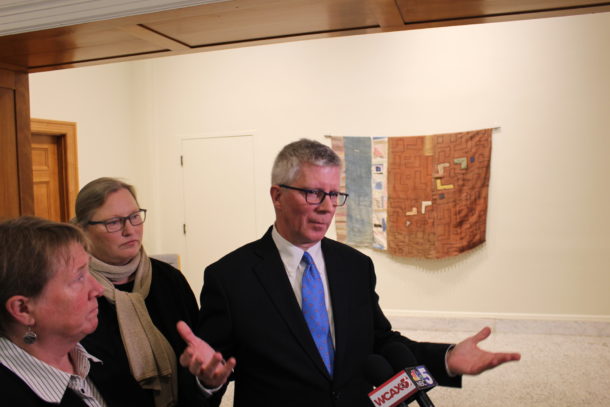 On Tuesday, Paul Phillips represented the City of Burlington before the Vermont Supreme Court for the Burlington Telecom sale appeal. Opponents of the sale asked for the case to go back to the Public Utility Commission so that additional sale conditions could be placed on the new buyer’s operating license. The City opposed this request on the ground that the challengers offered no legal reason to undo the PUC’s February approval order.  Paul Phillips argued, "The justices were focused, as they should be, on what is in the best interest of the city and its taxpayers, and this deal represents the best deal that's going to happen. And so even though everybody acknowledges that the full amount of the city's prior investments are not going to be recovered, this deal puts in place the best outcome that's possible at this point,"

Photo: Paul Phillips represented the city of Burlington at the Supreme Court hearing. City Attorney Eileen Blackwood is at left and Ralphine O’Rourke is in the center. Photo by Aidan Quigley/VTDigger