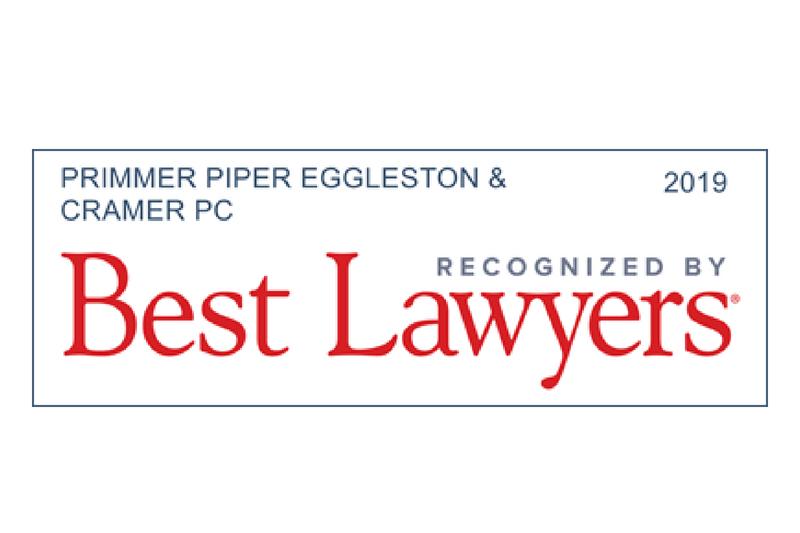 Primmer Piper Eggleston & Cramer PC is pleased to announce that attorneys Gregory S. Clayton and Doreen F. Connor were both recognized as the Best Lawyers 2019 "Lawyer of the Year" for their areas of practice. Greg was recognized for Mediation in the Concord, New Hampshire area and Doreen for Bet-the-Company Litigation in the Manchester area. In addition to the "Lawyer of the Year" awards, Greg and Doreen were listed in the 2019 Edition of The Best Lawyers in America for Mediation and Commercial Litigation and Appellate Practice, Bet-the-Company Litigation respectively.

Lawyers on The Best Lawyers in America list are divided by geographic region and practice areas. They are reviewed by their peers on the basis of professional expertise, and undergo an authentication process to make sure they are in current practice and in good standing. Only a single lawyer in each practice area and designated metropolitan area is honored as the "Lawyer of the Year," making this accolade particularly significant. These lawyers are selected based on particularly impressive voting averages received during the peer review assessments. Receiving this designation reflects the high level of respect a lawyer has earned among other leading lawyers in the same communities and the same practice areas for their abilities, their professionalism, and their integrity.

Doreen Connor has handled more than 180 appeals before the New Hampshire Supreme Court. Doreen was inducted into the American Academy of Appellate Lawyers (AAAL) in 2006.  She is the only New Hampshire attorney in the AAAL handling civil appeals. Her experience and reputation before the Court distinguishes her from those that appear before the Court less frequently. Doreen’s appellate practice includes appeals from attorneys and clients outside the firm, as well as appeals from existing firm clients. In addition to her appellate practice, Doreen has spent 32 years analyzing personal line and commercial insurance policies. She is well known for her expertise in insurance coverage matters. Doreen was inducted into the American College of Coverage Council in 2016. Doreen represents both insureds and insurance companies in disputes over policy language. She has the skills, experience, and knowledge to resolve complex insurance disputes efficiently and effectively.Best Lawyers 2019 Lawyer of the Year Awards

Greg Clayton draws on his over three decades of courtroom experience to serve mediation clients throughout New England. In recognition of excellence in the field of Alternative Dispute Resolution, Greg has been inducted into the National Academy of Distinguished Neutrals. He is an Adjunct Professor of Negotiation at Vermont Law School and a Fellow of the American College of Trial Lawyers.